The Newby hall squad trickled in to Helperby for the second game of the season, looking for their first win on the 1st of May. The sun was shining but the forecast was dodgy. Pitch report suggested that the Helperby groundsman had forgotten to put the covers on, resulting in a soft, wet track to play on. The absence of frontline bowlers in the Newby playing XI was a minor concern as was the fact that another couple of players reported the ‘snuffles’.

The skipper won the toss and Newby elected to field. With a few customary warm-ups and pretending to catch, Newby took the field. The wicket keeper was 13-year-old Leon Blackburn, standing tall with mentor and dad, Jim by the side in slips. Dan Herron and Tony Sidwell started the bowling and did admirably. Apparently, Danny hadn’t touched a ball since 2 seasons – the rustiness, if at all present, wasn’t apparent. The line and length was impeccable from both ends with the odd loose ball that was dispatched to the boundary. The standard of wicket keeping was good too – the misses were always deflected to slip for Jim to stop by Leon, but Jim’s dives always came after the ball had gone through. Helped by the extras and a Mike Dennett 79, Helperby got to 155. The other batsmen didn’t really get going while Dennett played fluently for his 79. Some very tidy spells from Tony Sidwell and Andy Robinson as well as good fielding ensured that Helperby never really got on top. Alex Wilson, even though not 100% fit, unleashed a few overs of accurate yorkers which even the set batsman Dennett found very difficult to handle. Mukerji was expensive to begin with but once settled into a rhythm created the chances and the safe hands of Jim Blackburn got rid of the Helperby top scorer. Mike Shires kept wickets in the latter half of the innings to give Leon a break. Special mention to Jacob and Andy for an excellent job in the field.

After a relaxed tea break, having consumed the BYOT offerings – the Newby openers Jacob Wilson and Nick Kent took to the crease. The start was fluent as usual with a flurry of boundaries, especially to the young seamer, Sowray who had a tendency to stray down the leg side to Kenty and needless to say, Kenty did not miss out. Jacob fell after a short cameo, still adjusting to his role as opener. Paul Follett and Jim Blackburn came and went giving company to Kenty who was the show stealer. He had 3 of his usual 9 lives and was it on the eye when trying to pull a short one from Henry Chandler resulting in stoppage of play while an orthopaedic and a neurosurgeon, usually sworn enemies, worked in tandem to contain the torrential haemorrhage from a 0.5cm laceration in the superior palpebral crease exposing the transverse fibres of the orbicularis oculi. The bleeding stopped, Kenty passed a concussion test and was fired up to carry on. Chandler had to stop bowling as his right arm over – turned to a truly right arm all over, his spell cut short due to dangerous bowling. Thereafter, Kenty just cut loose, playing some lovely shots all over the ground and seemed in a hurry to finish this off. Tony Sidwell joined Kenty for a rather uncharacteristic and laboured 19, but seemed to come into his own eventually as he finished the game off with a towering straight six. Newby Hall won in 25.4 overs with 7 wickets to spare.

Newby Man of the Match: Nick Kent 90 off 86 with 17 boundaries and black eye. Well played Kenty, rolling back the years. 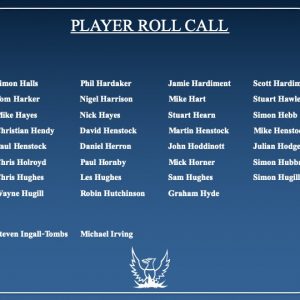